Murray’s was a jazz and cabaret club on Beak Street which opened in 1913, whose displays and costumes became more extravagant and risqué in later years. The venue is known for its notorious hostesses, Christine Keeler and Mandy Rice Davies who were both at the heart of one of the most enduring political scandals of our time, the Profumo Affair in the 1960’s. The club finally closed it’s doors in 1975.

Murray’s was originally opened in late 1913 by Jack May, an American and Ernest A. Cordell, an Englishman. It was part of the cabaret boom inspired by the tango craze that had been sweeping Europe and the USA. It stood on the site of the old Blanchard’s restaurant, formerly a famous coaching house constructed in the 1860s or early 70s. The entrance on Beak Street described as having a ‘severe frontage reminiscent of a bank or an office’ opened onto a hall out of which was a restaurant and thereafter a stairway led down to the main ballroom and dance floor below. This was a vast impressive room with a high ceiling; large chandeliers and the walls featured wood panels up half the walls. On one side was the dance area and on the other pillars to one side interspersed with tables and chairs. There was a great kitchen that catered for in excess of 400 diners, and behind the stage where the band played were dressing rooms for the entertainers. 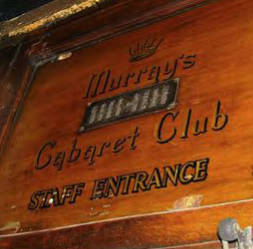 Ownership was passed to Percival Murray around 1933 and the club reopened its doors as an intimate Soho basement reminiscent of an American Speakeasy with strictly controlled admission and membership with space for 110 guests and a staggering staff of 100. In the 1930s, to avoid being caught by strict licensing laws which prohibited drinking after 11pm, it was run on the “bottle party system”; clients became “invitation holders” and signed a chit to enable them to drink spirits that they had previously “ordered” but not paid for.

In its 50’s and 60’s heyday by which time they had attracted a membership of 60,000, Murray’s Cabaret, (described as a “visual brothel” by one aficionado), was one of the most discreetly risque establishments in London, a place where the haut- and demi-monde rubbed shoulders and drank vintage Champagne with scantily-clad showgirls and hostesses. There was a pervasive atmosphere of sex, but customers would always assert, if asked, that they only came for the choreographed floorshows with attractive young hostesses wearing  elaborate and revealing costumes.

The secrecy guaranteed by the admissions policy enabled “crowned heads of Europe” to sit at the tables but most were the home-grown wealthy who needed somewhere to let their hair down; habitues included the Kray twins, Jean Harlow, Princess Margaret and Randolph Churchill. Christine Keeler and Mandy Rice-Davies worked as showgirls although Murray claimed to regret
the hiring of Christine Keeler, except that “she was so beautiful”.

Christine was a teenage runaway when she arrived in London and found a job here. She was befriended by Stephen Ward and she became one of ‘Ward’s Girls’. She was introduced later to John Profumo, the Conservative Government War Minister and Captain Yevgeny Ivanov, a Russian Spy masquerading as a businessman. Within days Ward began orchestrating meetings between Keeler and both men and she embarked on clandestine affairs with the Spy and the War Minister and the rest became history.

Times changed however and more explicit strip clubs and peep shows opened, and in the face of such competition the club closed in 1975. What had however survived is an astounding collection of costume illustrations for the risqué floorshows primarily showcasing the work of Ronald Cobb whose work can also be found in the archives at the V&A. The illustrations range between the 1930’s and 1950’s.

“Murray’s Cabaret Club…We star showgirls walked bare-breasted on to the stage, and the hostesses, all cleavage and chat, moved among the wealthy and aristocratic middle-aged [clientele]…It was only after I left Murray’s and returned to the real world that I realised the strange underground fantasy life I had been leading” – Christine Keeler

Murray’s Club was one of London’s first ever nightclubs. Jack May, an American, opened it on Beak Street in 1913. Dancing the tango was then the craze throughout London and this exclusive venue provided a dance hall for its wealthy enthusiasts. By 1930, debutante ball waltzes were at the mercy of chic flappers, and Jack May was at the mercy of the police. Deported by police after allegations of bribery and opium trading, nightclub aficionado Percival Murray took his place, opening a revamped club in 1933: Murray’s Cabaret Club. Soho was a hotspot for the shabby and the sleazy – for gambling dens, clip joints and anywhere else that fuelled the demand for out-of- hours drinking. But Murray’s was different. Percival Murray was soon employing a 130-strong staff, amongst whom were classically-trained choreographers, highly-literate lyricists, dance hall composers, skilled seamstresses in addition to dancers, showgirls and hostesses. Together, they pioneered the most imaginative and inventive floorshows in London. Two shows a night comprised three glamorous numbers, each based on a particular theme illustrated by fantastically elaborate – albeit scanty – costumes. The standard of these performances was uniformly excellent and displayed a military precision that could rival any ballet.

Within its intimate space, Murray’s offered a unique blend of the racy and respectable. Royalty, film stars, and leading politicians rubbed shoulders with gangsters on the fringes of polite society. Princess Margaret, King Hussein of Jordan, Jean Harlow, Randolph Churchill, the Krays – all were members of this notoriously exclusive Club. It was here that Murray’s showgirl Mandy Rice-Davies met property racketeer Peter Rachman. It was also here that Society osteopath Stephen Ward met Christine Keeler who had joined the Club as a showgirl in 1958. Through Ward, Keeler met government Minister John Profumo. Her simultaneous relationships with both him and a Soviet naval attaché would soon spark a national scandal that hailed the birth of the permissive Sixties and the ultimate death of the Conservative government. Murray’s was, by association with the Profumo Affair, brought into disrepute. But the Club could only ever struggle on; times were changing and with the opening of the Playboy Club and other louche establishments, Murray’s recipe of mild titillation and sophisticated entertainment looked dated in comparison. Plans to introduce a gambling floor fell through and with the burden of enormous overheads – the amazing costumes and floorshows cost a fortune – the Club closed in 1975.

From 22nd March 2018, the Century Club will be exhibiting costume designs from Murray’s Fifties heyday. The majority are by Ronald Cobb (1909-1997) whose risqué gouaches combine ingenuity and style. They are an amusing assortment of witty French maid fantasies, macabre mannequins in sweeping cloaks, and startling space-age headdresses. G-strings and period humour abound but Cobb’s bizarre confections of plastic, gauze and body paint are always on the right side of kitsch. There are also a few designs by Michael Bronze (1916-1979) whose sketches are intricate and lavish. His bejewelled Cleopatra-style costumes ooze the elegant sophistication of Fifties glamour. Some earlier costumes by Hilda Wetton (1896-1980), the legendary designer with The Windmill Theatre will also be on display.

“There’s nothing much left of it in Soho except the legend and the memories”. That’s what Christine Keeler, years later, wrote about Murray’s. Only now can we reassess that conclusion: in the Fifties, these costumes injected a rare sparkle into a West End blighted by austerity. Now, hidden away carefully for decades by the family of Murray’s head seamstress, Elsie Birchmore, this is the first time they will be on public display. Shield your eyes – their sparkle has never dimmed…

The Murray’s Club exhibition is being hosted by:
The Museum of Soho www.mosoho.org.uk
at The Century Club in Shaftsbury Avenue
running from 22nd March 2018 to 7th April 2018.
Book your free place here